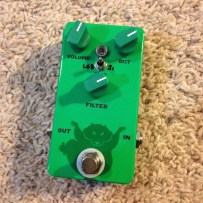 Taurus Pedals are producing some great guitar effects out of West Fork, Arkansas, and while that might not sound like a town drenched in a hotbed of activity, their stompboxes tell a different story altogether. I was able to connect with Russ from Taurus, and he sent over a couple of pedals for me to test out and review, the first of which is this little green monster, the 90 Lb. Hamster Distortion.

Awesome name aside, the 90 Lb. Hamster looks cool, and the dancin’ kung fu critter graphic is a nice touch as well. Relatively simple in design, Volume controls the overall output of the pedal, and the Dist knob adjusts the amount of Gain your want this baby to produce. Now here’s where it gets fun. Based off of the classic RAT distortion pedals, the Hamster’s Filter control is actually a treble cut knob, so the roles that would normally be played by a Tone knob are reversed. Turning the Filter to the Left ADDS treble, while turning it to the Right cuts it. Easy enough to figure out, but a fun tip of the hat to the vintage RAT pedals of the 80’s.

There’s a 3-way toggle switch in the middle of all this as well, and it opens up the possibilities for so much to happen. Controlling the clipping diodes, there are 3 options to choose from: LED’s, Lifted and Silicon. In LED mode, there is a bit of signal drop, as they require a bit more voltage before they’ll turn on. The middle selection lifts all the diodes from the circuit, and just uses the op amp saturation for distortion. Finally, the Silicon diodes provide one more sonic pathway to boost and distort your signal.

Built like a tank, with controls that are easy to dial in or adjust on the fly, and a sleek, bright green enclosure so you know where it is even in the dark, the 90 Lb. Hamster is a killer distortion pedal all around. Thanks so much again to Russ and everyone at Taurus Pedals for letting me witness the power that is being hidden in Arkansas – I can’t wait to try out more of their gear. Don’t forget to go check out their site, and see what they can offer YOU!